We sent collector Shovelman from the USA the 380XDLC-10 Asian spec scale model. Read his honest fan blog review below.

In 1984 I purchased my first Kobelco scale model from a local equipment dealership that had become a charter dealer for Kobelco in the United States. It was a K909A crawler-mounted  hydraulic excavator produced in Japan by Modeling Ashiya Model (not a typo) in 1:50 scale. At the time, I could not have imagined that it would be over 30 years before Kobelco produced another excavator in 1:50 scale!

As the decades passed, Kobelco produced many excavator models in a variety of scales but nothing in 1:50. Sometime in 2016, somebody in Japan made a decision to return to 1:50 and I wish it was possible to thank them.

In 2017, Motorart produced models of the 20 ton class SK conventional machine in 5 variants and the 14 ton class SR (Short Rear-swing) machine in 3 variants. Variations of both models are confined to paint color and model designation markings utilizing the same castings.

Conrad entered the field with the SK500LC-10 and ROS with the ED160BR-5, both in 2018. These models were produced in green for most of the world and yellow for the USA and Canadian market.

So what is an SK380XDLC-10? Kobelco Japan refers to it as the “Middle East Specification”, but the machine is also marketed in India, China, Africa, and many countries in Southeast Asia.

This 1:50 scale SK380XDLC-10 is “technically” a variant of the previously mentioned SK350LC-10 due to mutual castings; yet the main boom, crawler shoes, hydraulic cylinders, and bucket linkage struts are the only things identical on both models.

Beginning at “ground level” I will work up and out from there noting the differences between the SK350LC-10 and SK380XDLC-10. For the remainder of this review, the two models shall be referred to as 350 and 380. 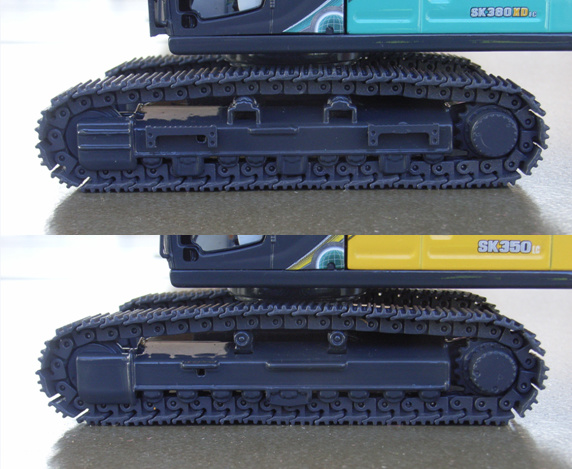 While both models utilize the same metal cab, the 380 has a FOPS guard with two integrated lights mounted to the roof and a lower front glass guard is simulated. Both of these parts as well as the cab interior are made of the typical ABS used by most model manufacturers today. 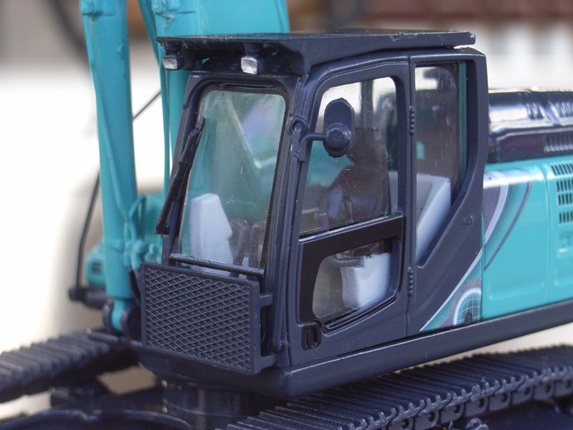 Going back to the 380 counterweight, there is one small detail worth noting. Near the upper corners, graphics are fitted to simulate the swing warning and rear work lights which are standard equipment in some markets. Machines for Japan and Europe do not have them, but the USA and Canada are one of those markets so it is interesting that they are missing on the 350 and the previously released yellow SK210LC-10. 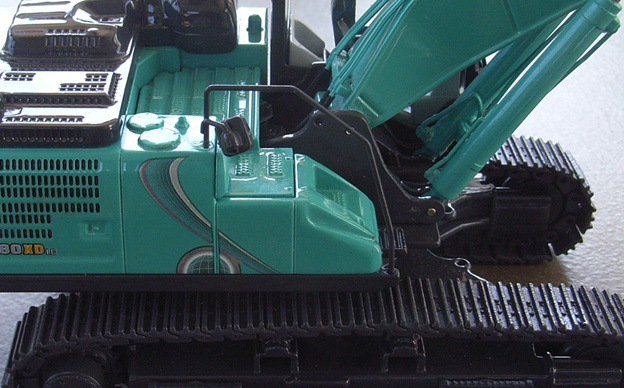 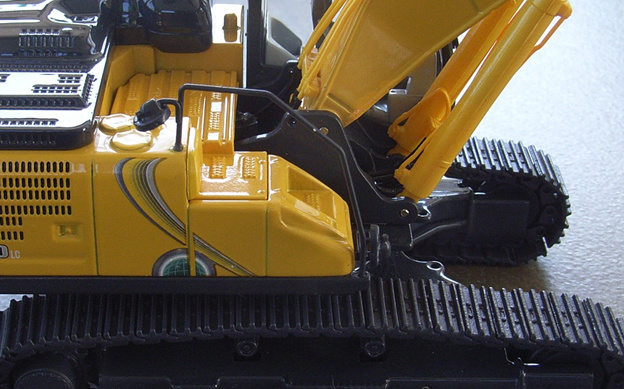 Sharing a common boom casting, the two models have different arms and buckets. The 380 has a shorter arm, with wear plates on the inside and a larger bucket with wear plates on the exterior compared with the longer arm and a shallow Japanese-style bucket (so common to Asian excavator models) on the 350. The links between the bucket and struts are also different castings. 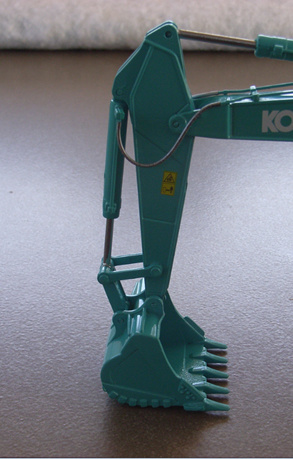 Another curiosity observed were the ABS hydraulic lines on the boom. They are accurately represented on the 380 but not on the 350. You can see the arm cylinder lines abruptly stop at a line stay behind the boom cylinder piston rod mounts, instead of running all the way down like the other lines. 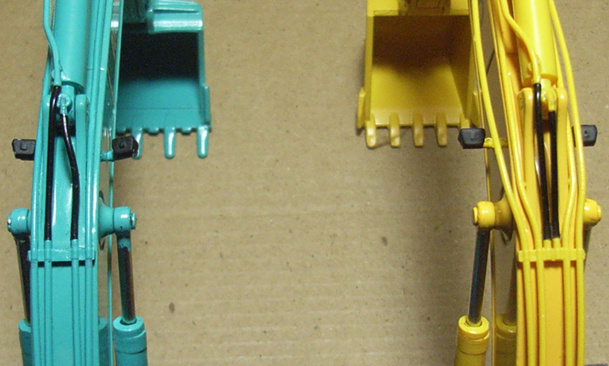 When I was approached about doing this review, it was with the condition that it be completely candid.  That being said, it is my opinion that a review and a critique are two different things. To that end, my summary focuses on “what it is” instead of nitpicking about “what it could have been”.

There are two noticeable flaws on this 380 sample. One can be seen in the photo showing the top of the boom where there is paint on the ends of the hydraulic cylinder piston rods. The other is sloppy gluing at the base of the boom where the flexible supply lines connect to the hard lines on the boom cylinder barrels and two of the flexible lines are not connected properly to the hard lines. 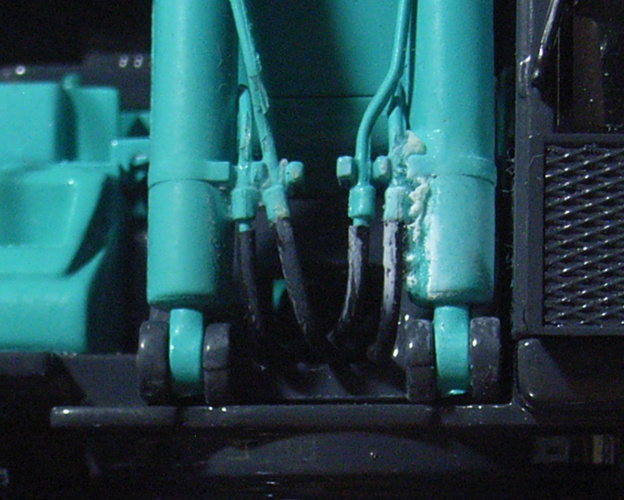 Other than that, the assembly and finish of this mostly metal model is excellent. Castings and graphics are excellent. The boom, arm, and bucket have been engineered properly to provide full range of movement so the model can be displayed in any position desired.. It has a good weight for its size and is solidly stable with the arm and bucket horizontally extended.

Gluing the flexible hydraulic hoses to the hard lines results in a more realistic appearance than the loop on post method used by some manufacturers.

With the heavy duty undercarriage, larger bucket, etc. I feel the 380 has more “presence” than the 350, and it would be an easy decision and my choice if I could only purchase one of the two.

The model is a bit expensive when taking into consideration there is at least one 35 ton class crawler excavator scale model on the market of equal or better quality and superior execution with opening access covers and cab door priced very close to the 350 and 380.

Of course, every collector must decide how they want to spend their money. Kobelco fans (like myself) will find it hard to resist adding the 380 to your 1:50 fleet!

I have been informed this is a single production run model, so it may be a prudent decision to get one sooner than later.

The Kobelco SK380XDLC-10 is expected to become available for purchase from the Kobelco Europe Fanshop in July and will be announced on their Scale Model Blog and in their Newsletter. 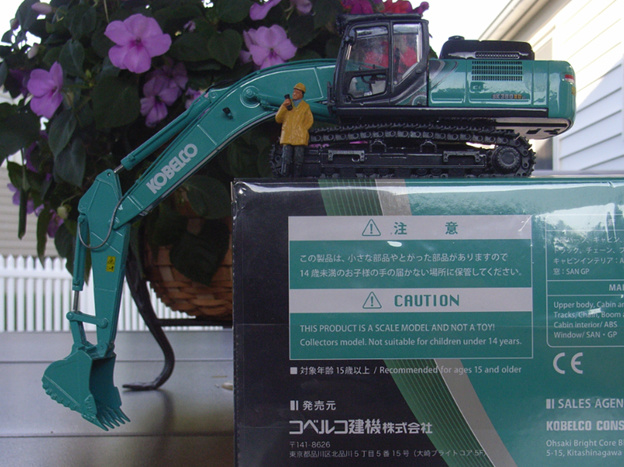